The Ushirika Cooperative is a co-operative grouping mainly women from the Mathare slums. The women learned to sew there. With the acquisition of sewing skills and the possibility of earning money, women began to emancipate. Some men were not happy about this - husbands and men living in the Mathare slums. During the workshop will be writing captions - letters on the men’s shirts, which will be given to the men in the Mathare slums.
Target group: fathers and sons.

is an artist born in 1979 in Kraków. She creates objects, photographs, and films. Between 1999 and 2004, she studied at the Faculty of Sculpture at the Academy of Fine Arts in Kraków. She graduated with honours. She belonged to the feminist group ‘grzenda.pl’ and the Artistic Association ‘Ośrodek Zdrowia’. She lives and works in Kraków.

A versatile artist working across diverse media, she creates sculptures, photography, drawings, objects, and installation pieces. She is most involved in exploring the creative possibilities of the interface between art and reality and projects in the public space. Her versatility lies in the ability to adapt the language of artistic statement to the requirements of the message addressed to the viewer. Her work is characterised by a generous dose of irony as well as a certain distance from the issues it tackles. 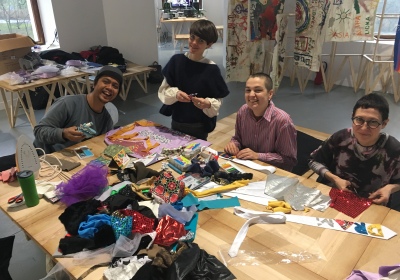