×
12/11/2017
questionnaire and performance in the public space
Wileński Square, Warsaw

Open Monument is an initiative for creating a popular, collective-autorship memorial in Warsaw. Inspired by various commemorative objects, abandoned memorabilia, monuments, and historical memory sites within the city, the project was originally aimed at making use of the empty fenced space at the base of the removed Brotherhood in Arms monument. After the Warsaw ZDM (Street and Traffic Management Department) turned down the notion for the use of the base, the intervention had change it’s character – instead of any object, only bodies and voices of performers occurred in space.

Using the instrument of an open-call, the authors of the project gathered propositions from people of different backgrounds, ages, class and ideological orientations for an imaginative monument. Without abiding by any selection criteria, everyone submitted their own concept including a description or name of the proposed monument. The open-call was widely distributed (in kindergartens, schools, asylums, prisons, art schools, museums, universities, churches, soccer clubs and party venues), the call became the basis of an ephemeral performance exploring the dissonance between the submitted propositions, as well as the dynamics between the fixed and the moving, the eternal and the temporary, between stone and flesh, and creation and demolition of historical narratives. Open Monument was a performance based on a collective script, tackling the tension between construction and destruction, as well as the power relations within historical representations. It explores an open form of narration.

The Brotherhood in Arms is a nationalists state-commissioned monument completed by a collective of artist commemorating the joint effort of Polish and Soviet soldiers against the Nazis built in Praga district of Warsaw in 1945. In 2011, it was removed due to the construction of a new metro line. In 2015, Warsaw municipal officials ordered the monumnet’s final removal on account of its association to Poland’s communist history. According to surveys carried out in 2012 and 2013, the majority of Warsaw’s residents said they would like to see the monument return to its original spot or to be placed nearby. The base remains in place, sullen remainder underlying an invisible monument remains – empty and fenced.

History and memory are not stable matters. Both are malleable structures affected and designed by power relations, political negotiations and struggles. They form the basis of relations in constant transformation, manifesting frequently into indexes of tension between people. Transformations in the political, economic and cultural arena are often materialized and visible in the urban landscape. Monuments, buildings, highways and squares are material manifestations of the transitory dynamics of history. But absence, too, can be read and interpreted as a negative manifestation of historical content. The empty base, from which the proposed concept of the monument originates, is one such space of absence. The void here becomes a measure through which we can look at what is still there.

This event took place on November 12th, 2017 (Wileński square in Warsaw), based on a script developed in accordance to collected questionnaires and in cooperation with members of the Intervalo-Escola. In the exhibition space we continue to show materials from the work on the project – photo documentation of the performance and the list of monument propositions (on the book table in 1st room). 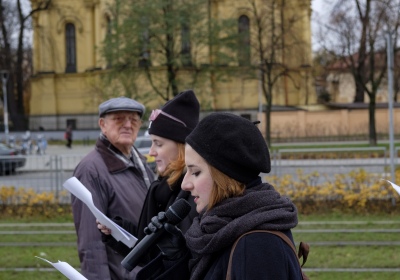 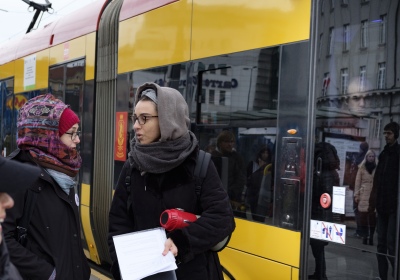 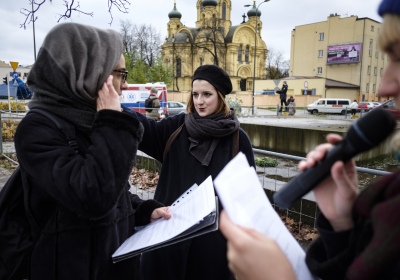 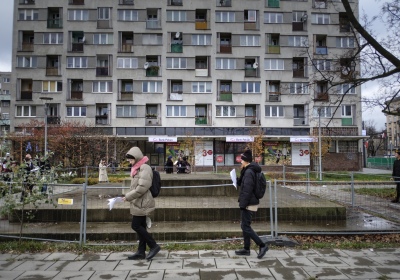 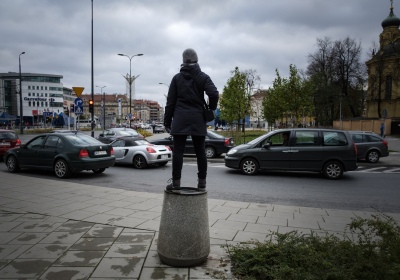 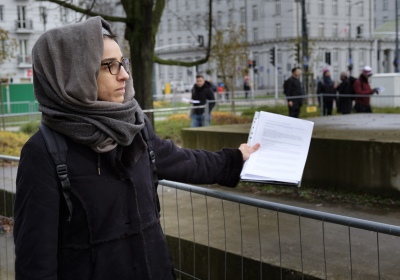 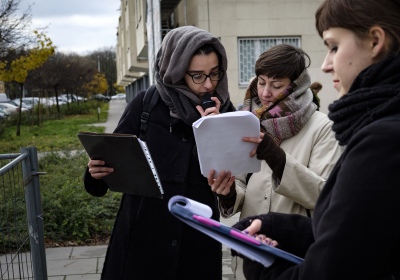 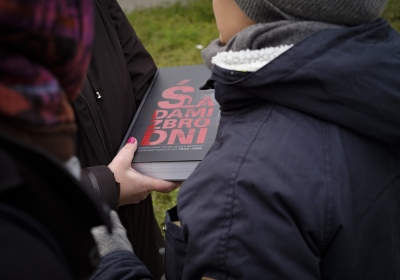 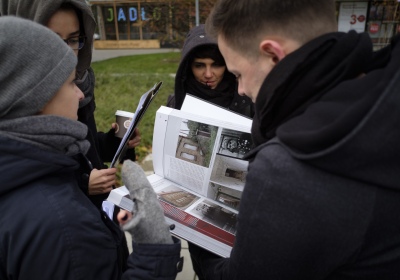 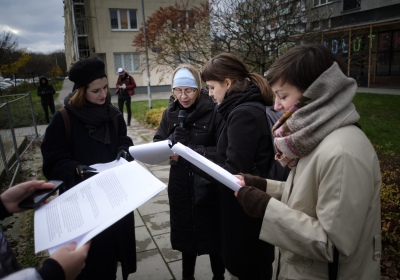