Komunitas Pengamen Jalanan is a sort of trade union. It works in Jakarta on improving the quality of life (health insurance) and work (performanon permits) of street musicians and on promoting public acceptance of their trade, which people typically associate with panhandling. Pengamen is a busker, while ngamen, more broadly, is work performed in the street. Indonesia has a long tradition of making a living this way, and the busking tradition stems mostly from poverty and unemployment; especially in its early days buskers’ songs addressed government violence, social relations and the economic exploitation of the people on the bottom rungs of society. Today, to be accepted, the pengamen often play popular music.

In Rogalska’s workshops, street musicians Budi Setiono, M. Ridwan, Nashikah S., Saiful A., Supriyanto and Titi Jorariah, who carry a heavy baggage of experience, which includes homelessness and lacking alternative work opportunities, or those coming from the provinces and learning to adapt to life in the city by busking, or those launching their musical careers in the street, wrote the texts together; they address their social conditions, while their melody was inspired by traditional protest songs of Iwan Fals, an activist of the transformation in the last years of Suharto’s rule. They performed a song and a special choreography relaying their ambivalence about being in a public space at the opening of the Social Design for Social Living exhibition at the National Gallery of Indonesia in Jakarta in June 2016. This was the first time buskers performed in a state museum with a repertoire that many guests at the exhibition opening viewed as controversial and politically incorrect. The two-week collaboration also gave rise to a series of street performances and a video clip made in spaces where musicians usually play. The masks the musicians wore in the video are a metaphor for reality and its potential distortion, changes within it and within the pengamen identity being shaped from the outside. The masks also allude to the musicians’ words: even though they are proud of the work they do, they sense that everyone would be happy if they simply disappeared.

The project exists in an unlimited edition, and every participant receives a copy they can use professionally. The song written during the workshops is now in the group’s repertoire, and it is also used by the pengamen in their workshops for street children. Rogalska uses both street and traditional music to transmit the experience that carries not only a verbalized meaning, but also transmits an emotional layer of feelings and experiences. It is a sentimental social document.

Alicja Rogalska together with the members of Intervalo-Escola will organize a Protest Song Karaoke on November 3rd 2017 in the exhibition space.

Polish artist, living in London and working internationally. She refers to herself as a midwife who initiates a process and coordinates it. She emphasizes that in this process of creating a common whole, the people involved in it and their stories interest her the most. The artist uses her privileged status as a platform to create space in the public sphere. The initiated events or meetings – ephemeral moments – are catalysts for collective deliberation, imagination, questioning, and testing of different ways of being together. Her practice is centered around the motifs of social and political contexts of everyday life, including research and the production of situations. Rogalska’s implementations are rooted in both contextual and speculative work, somewhere between that which already exists and that which might be possible. Graduate of Fine Art (Goldsmiths College, University of London, 2011) and Cultural Studies (University of Warsaw, 2006). Resident of KulturKontakt in Vienna; in 2017, the artist received the IASPIS grant in Stockholm. 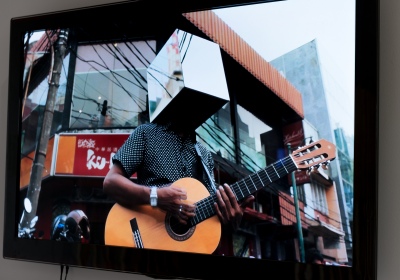