Vincent Rumahloine is an artist and activist with local communities in the kampungs of Bandung, Java’s third-largest city. Art is not valued in this overcrowded district of low socio-economic status. For this reason, his recent project in Bandung included not only locals, but important figures who could examine perceptions of the artist’s position and the place of art in the modern world. Rumahloine’s work method is interesting in itself. First, he introduces himself and his project, and shares his observations about life in the course of his everyday involvement in the local community. He puts on no formal meetings, workshops or other activities. He gradually builds up trust and interest in his project, eventually becoming a member of the community, which then together joins the process of creating artwork. The project’s finale is a public exhibition not in an art gallery but in the place where the art was created. Rumahloine shows that art is not an elite product but a universal language. Important to the whole process is the involvement of so-called ordinary people, and it is from them that the artist learns, with conversations and interviews an important part of his work. Rumahloine believes that social change begins in one’s closest milieu. His motifs and working methods encourage the people living in the poor districts to learn about their own history of growing up in hardship and managing to come to terms with the surrounding reality.

The mural portraits of people of Pulosari Community are Vincent Rumahloine’s photographs, which he divided up into the common A3 format using a computer program, then assembled into a whole. The portraits were initially shown in this form under a bridge in Bandung, in a gallery created together by participants in the creative process who swept rubbish from the stone riverbed in order to make the exhibition space festive. The artist and the people of Pulosari took this series of photographs over three years of conversations in their homes, shared experiences and celebrations of traditions.

The grassroots museum that fits into a 2×2×2 m cube was created in the Pulosari kampung in Bandung and soon became a place for meetings, conversations, exchanges and recreation for different groups of people. The collected objects had earlier belonged to local people and told their simple stories. At the exhibition, the cube serves as an incubator for Rumahloine’s brand-new project, a bridge between Bandung and Warsaw.
The photographs and portraits shown inside the cube represent HIV carriers he interviewed who are active in the campaign of INDONESIA TANPA STIGMA (INDONESIA AGAINST STIGMATIZATION). Rumahloine has spent the past few years working at the Rumah Cemara Center in Bandung, an exceptional centre of social assistance to HIV carriers, AIDS patients and their families. He uses art as a tool to join in the fight against the exclusion and stigmatization of this social group.

Vincent Rumahloine will be a resident of U–jazdowski in December, he will participate in the public programme and conduct workshops as a part of Intervalo-Escola.

Indonesian artist working with mixed media, mostly photography and video. He graduated from the Fine Arts Department of the Bandung Institute of Technology in 2009. After, he began to work as a high school art teacher until 2014; this experience of dealing and interacting with high school students taught him how to interact with communities in the future. Since 2011, he has been involved in social work as a volunteer in several organizations including Rumah Cemara Center (HIV and Drug Addiction Treatment Center) located in Bandung that works on anti-discrimination programs too). Those experiences are crucial for his art practice.

The Center founded by five former drug users in 2003. The aim of this community organization is to improve the quality of life for people with HIV-AIDS, drug consumers, as well as other marginal groups in Indonesia through peer support approach. Rumah Cemara dreams of an Indonesia without stigma and discrimination, thus why the organization will soon participate in the Nationwide AIDS treatment and drug control programs along with the formulation of policies in favor of the fulfillment of human rights and equality. Since 2011, Rumah Cemara started to use football and later, also boxing workshops for their sport development program and opened their office to the public. In 2013, they started the “Indonesia Tanpa Stigma” as their national campaign. With the help of a few new friends, they held a sports festival with the tag line “Solidarity Run.” 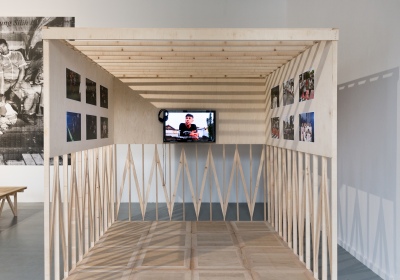 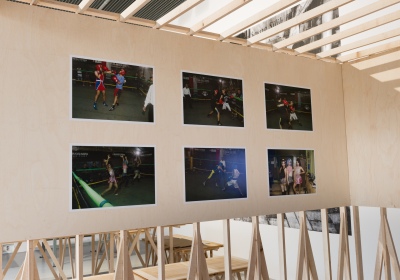 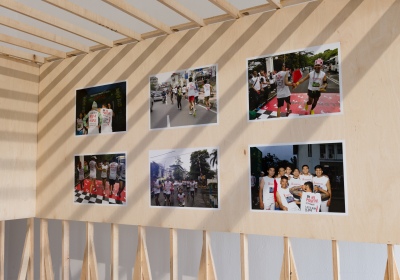 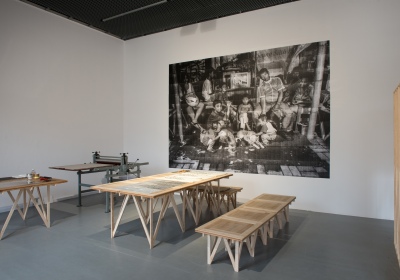