Five hundred volunteers with spades dug through an enormous sand dune on the outskirts of Lima, Peru’s capital, to move it by a few inches in one day. Alÿs had this idea on his first visit to Lima in 2000, the last days of Alberto Fujimori’s dictatorship, which thus gave it its political roots. Alÿs’s creation of a poetic social allegory to match the circumstances was an answer to the situation he found: street unrest, social tensions, the birth of a resistance movement, in other words, a maximum effort for a minimum outcome. The digging action was registered on photos and film, even though it is unlikely that any passerby noticed that the dune had been moved. The power of the work lies in a joke, an anecdote growing around the event.
Speaking about it, the artist points out the democratization of land art, a 20th-century art form addressing entropy and man’s ways of being in the environment usually through individual artistic interventions in the landscape.

His poetic, post-conceptual and interdisciplinary work arises at the intersection of artistic practices, architectural considerations (he studied architectural history), and social practices. He deals with justice in the distribution of space, the tension between politics and poetics, individualism and community, as well as powerlessness. Similarly to the creators of the land art of the 60s and 70s, he is interested in perpetuity and passing away, but understood in terms of geological time – in his perspective, it captures individual memory and collective mythologies. His works are often ephemeral or are dematerialized and function in the form of gossip, stories, or anecdotes. The most notable implementations include, for example, walks serving to organize public space, e.g. with a magnetic dog. 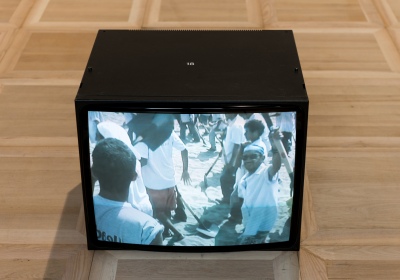