Tita Salina and Irwan Ahmett use the courteous-subversive methodology as a strategy of crossing elements and systems from different orders over the heads of the authorities governing its territories. They start with the conditions they find and are courteous but subversive, so as to view themselves as artists, but also as citizens who negotiate given problems and offer new narratives. Their practices have no set formula, and they define their methodology by using the creative process, thinking, negotiating and facing the surprise-filled uncertain situations. The artists led workshops in architecture and poor-design in kampungs, districts with low socio-economic status, and also co-led a project promoting awareness about the use of energy resources in a country whose hundreds of millions of people are dependent on scooters and large cars. The first film to be
shown, Kancil Crossing the Street, is ironic as it comments on the intensity of the public space and its dominance by private means of transport. It was inspired by a local folk tale about a wise lesser mouse deer who crossed a river by jumping from one alligator’s back to the next. Trash Ball is a simple conceptual exercise. The recipe: make a ball of plastic rubbish grow as if it were a snowball. After a year, when it is very large, place it somewhere in traffic. The first such ball was made in 2012 in a kampung, a slum, in Pejaten in southern Jakarta by artists and local children who helped to collect rubbish. The second one was made in 2013 in the same location through crowd-funding with locals’ help with collecting local rubbish. It disappeared two days later. No one knows who removed it: rubbish collectors or an art collector.

Irwan Ahmett is an interdisciplinary artist whose work lies between art and design. he and Tita Salina have been running the Ahmett Salina Studio in Jakarta. Tita Salina’s works include elaborate narrative performances as well as videos. She focuses on important global and local issues – from the gentrification of cities to environmental pollution. She transforms documentary video footage into complex epic scenery. Artists have joined forces in long-term projects related to local Indonesian communities by creating documentary films, organizing workshops as well as interventions, and, through this, changing the local everyday life for the better, whilst at the same time slowing down the fierce, capitalistic transformations of places subjected to the laws of the market. They worked together in the red light district in North Jakarta, where they conducted an informational campaign on contraceptives and workshops on architecture and poor-design in the Kampung District (housing-estates of low social and economic status). They spread awareness on the subject of energy consumption in Indonesia, whose hundreds of millions of inhabitants are dependent on scooters and large trucks for transportation. In recent years, along with over a dozen of young artists and designers, they have formed an informal local housing fraternity and project team, which is characterized by energy and enthusiasm for the work they do. 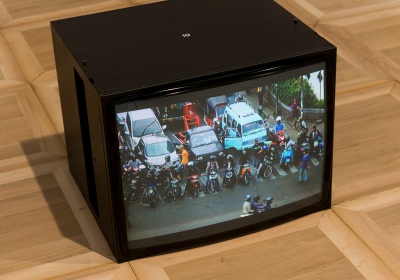