The video shown at the exhibition is one in Luna’s Public markets cycle begun in 2016, in which the artist documents changes in social structure using market squares as examples. Luna first observes the market and his own integration into the market community. This community, about which and with which he creates his project is not only a commercial but also a spiritual community. He analyses not only its socio-economic relations, but also the myths and narratives which construct and organize the community. In 2008 Luna began a broad action to unite the merchants of Mexico City’s largest market, La Merced. To symbolize the union of the bazaar’s ten sections, he created the mystical figure of Señor del Maiz, Lord of Corn. Especially in Mexican culture, corn symbolizes prosperity, happiness, rebirth, growth and development. The annual ritual begins with a procession with a male figure made by the community out of corn kernels. It takes place in October, on the first Tuesday of full moon. Every year a new figure is made and placed in a specially constructed alcove. Every year a different market square organizes the event, and all the others are present through their representatives carrying flags in the procession. The goal of the holiday is to cast a spell for prosperity for the merchants, and the statue symbolizes all kinds of prosperity. A feast with food and music, each year funded by a different section, concludes the festivities. The artist emphasizes that the social network, which helps people to survive and is built thanks to the ritual, is also an aesthetic construction. The cycle will close with the tenth procession in October 2018.

He graduated from the Visual Arts Department of the National Art School in Mexico City. Amongst other things, he performed a series of studies upon aesthetics, art and violence at Colegio de Saberes (Knowledge School) from 2010 to 2011. His work focuses mainly on processes related to the theories of knowledge and on artistic interventions at specific sites. Since 2006, he has carried out his work within the context of public markets in Mexico City and the social structures that constitute them. His work has also been shown in various public venues both in Mexico as well as abroad, such as: Museo Universitario de Arte Contemporáneo (MUAC) in Mexico City, Museo de Arte Contemporáneo de Monterrey (MARCO) in Monterrey Mexico, Guest Projects in London, and Storefront for Art and Architecture in New York. 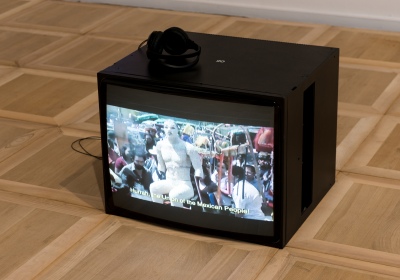