Tita Salina works mostly with expanded narrative performances and video images. She chooses important subjects that are simultaneously global and local, ranging from urban gentrification to environmental pollution. She transforms documentary films into extensive epic landscapes.
The title of the video she created together with fishermen from Muara Angke, the 1001st Island, is a reference to the famous tourist paradise called the Thousand Islands (Kepulauan Seribu), a chain of 110 islands in the Java Sea north of Jakarta. To reach the hundreds of private or chartered ‘artificial paradises’, the world’s largest archipelago, one must cross a sea of rubbish in the polluted Jakarta harbour. Salina’s video is a protest against the passivity of the local authorities and a beautiful but harsh critique of the government deal that has allowed this to go on for years. The people living in the town in which the film was made will soon enough also be affected by the approaching seawall project, which aims to stop the flooding of towns and their new seaside residential areas by rising sea levels. It is a component of a gentrification plan which includes creating a further 17,000 islands in the archipelago and which is advancing despite the constant questioning whether it will solve Jakarta’s real problems of fighting water pollution and waste management.

Her works include elaborate narrative performances and videos. In her creations, she focuses on important global and local issues, from the gentrification of cities to environmental pollution. She transforms documentary video footage into complex epic scenery. 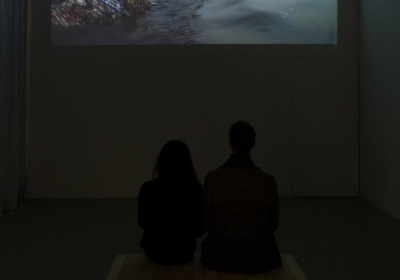