One of the key debates in news articles about the Political Art exhibition regards the performance that took place during the exhibition opening. The Associated Press agency’s report from the event provided a basic account that has been distributed around the world. A few days later a video of the performance appeared online resulting in a barrage of different responses. The video is not related to the exhibition. It’s been edited. Based on this, news organisations and others have accused the artist, Uwe Max Jensen, and the organisers of the exhibition of a long list of crimes: they claim the performance was racist and mocked the death of George Floyd – a “deliberate use of racism to gain attention.”

However, none of these accounts describe what actually took place and the criticism is based in a simplistic and superficial account of the performance.

First, the critics refuse to acknowledge that the performance was an artistic action. Therefore I will describe the work and explain some of its implications.

The audience was invited to experience an art performance. It took place in the courtyard of the Ujazdowski Castle Centre for Contemporary Art. At the centre of the courtyard, a black plastic sheet lying on the ground delineated the stage. Jensen entered this space and unfolded a Confederate flag. This is a symbol of ‘the rednecks’, i.e. ‘racists’. Thus, the artist entered the role of a ‘racist’ and this character began shouting the n-word – just as one would imagine a racist would.

There was a group of protesters in the audience. Their message was: “Down with fascism.” This is also the message of the entire exhibition, but they did not seem to be willing to fully accept that. They protested against the politicization of the exhibition. A group of five people were standing together and started interacting with Jensen and interrupted his work. One of the demonstrators, a man wearing a dress, walked onto the stage area and started dancing close to Jensen. Another demonstrator was waiving a Pride flag near the Confederate flag, so that the two flags appeared to move together.

Later, Jensen (in ‘redneck’ character) laid down the flag and undressed. As this happened, the demonstrators instinctively took a few steps back, away from him. In the following silence the artist covered his entire body in black paint and as soon as he also painted his face, the protesters started to shout: “Fascist!”

The paint turned into a costume and a naked man covered in black paint was standing on the stage. Some dramatic events followed: Jensen ended up lying on the floor, face down, and hands on his back. He screamed, “I can’t breathe, I can’t breathe!” over and over again. This figure was in true pain and fear. The demonstrators turned quiet. The entire courtyard went silent and the voice of a man in despair was the only thing that could be heard. Jensen crawled on the floor with his hands on his back. He crawled into the audience and ‘died’. There was a buzz in the air; nobody knew what would happen next. Then, another metamorphosis took place. The ‘dead’ man stood up. At this point, he was meant to destroy the confederate flag, but lacked equipment and instead, the flag was laid on the ground and people walked onto it. The ‘resurrected’ black man started shouting, “Black lives matter!”

He walked around the courtyard with this message. One could say that was completely logical following the death of the other character. The man ended his walk around the space opposite the demonstrators, shouting the message at them repeatedly. The demonstrators responded by shouting “Fascist! Fascist!” The artist then joined the group, kneeling in front of the protesters, shouting at us, the audience: “Fascist, fascist!” This caused some confusion, but also created a moment of absurd harmony. The opposing groups joined as one voice.

In this position, the kneeling man then made a Nazi salute while at the same time shouting “Fascist, fascist!” together with the demonstrators. One demonstrator tried to cover his stretched out arm with a black umbrella. At this point, Jensen stood up up and announced the end of the performance.

Critics claim that the middle part of the performance was satirical, and thus offensive, but nothing could be farther from the truth. In the 1980s, Jensen’s own uncle died in similar circumstances as George Floyd. For Jensen, the death of George Floyd has been a reminder that police must be more careful when dealing with people abusing drugs and people with mental illnesses. Playing the role of the man dying on the floor was also an act of solidarity, obvious to everyone in attendance, an act that caused an intense silence in the audience.

The performance certainly had a touch of reality. Jensen didn’t try to impersonate George Floyd, but rather he “was” George Floyd. This was the experience and in this way it was a great example of a feature that links all the artworks featured at the exhibition: people’s lived experiences channelled through pictures, sculptures, videos, and words. 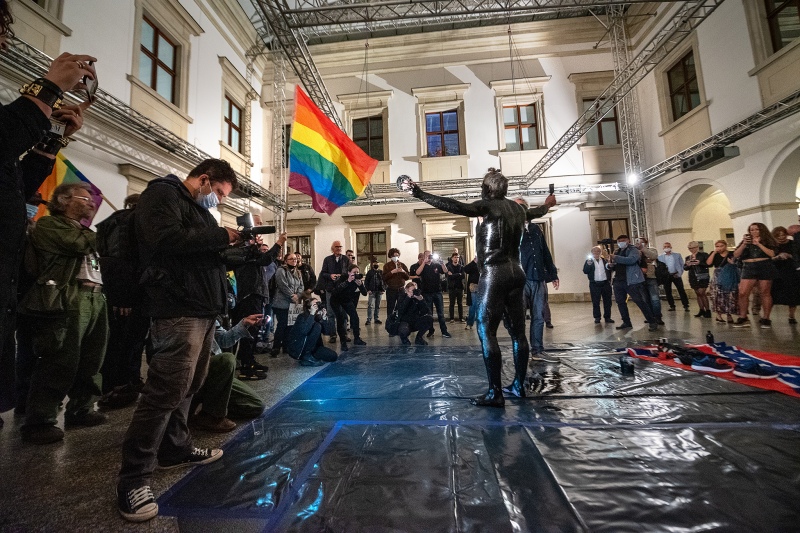