lives and works in New York. Her other exhibitions this year were: Context is Everything at Mullerdechiara Gallery in Berlin and A Whitney for the Whitney at Altria at the Whitney Museum of American Art at Altria in New York.

In Warsaw most things that look old are really new. Like Ujazdowski Castle, whose reconstruction was only completed in the early 1980s. The only original structure is the Laboratorium outbuilding which looks both much newer and less glamorous. New is Old takes what was a disused storage space in Laboratorium and makes it look its age. At the same time, it tries to make the outside and inside of the space match the castle's neoclassical façade. The walls of the space are painted with watercolor s to simulate age. The outline of a decorative architectural scheme is painted in white on the interior and exterior walls. The decoration is completed by a series of seven small oil paintings in faux-old gold frames of polaroids taken of the rooms in Ujazdowski Castle. The rooms chosen are all aggressively modern in style and are ones to which the public has no access. 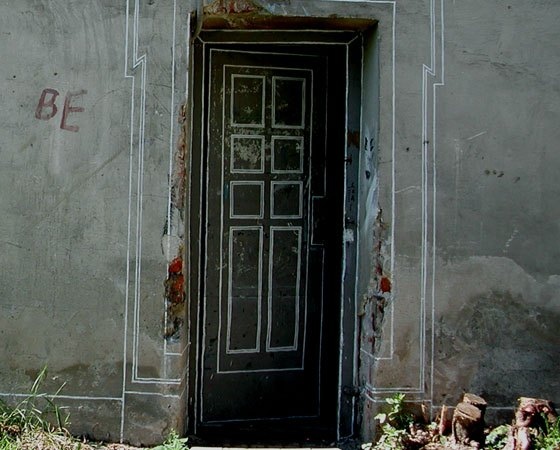 Residents a
New is Old was produced in connection with a two-month residency at the Ujazdowski Castle Centre for Contemporary Art in Warsaw, Poland, through Art in General's Eastern European Residency Exchange Program.