(b. 1954) is a Senegalese artist, activist and curator, co-founder of the revolutionary artistic collective Laboratoire AGIT'ART. After graduating from the Academy of Fine Arts in Dakar, El Sy actively shaped the artistic community of the city, acting with local communities, combining in his artistic activities performance, improvisation, street installations with an aesthetics which can be correlated to European modernism in painting. He helped to popularize interdisciplinary artistic projects of a generation of young Senegalese artists and social activists.

The AGIT'ART Laboratoire group set up by El Hadji Sy, comprises artists and activists (including the world-famous director Djibril Diop Mambety and playwright Youssoupha Dione) contesting the cultural policy based on the concept of negritude, fighting for freedom of artistic expression and spontaneous blending of disciplines. In 1977 El Hadji Sy created an artistic commune - Village des Arts - on an island near Dakar. Nowadays about 70 artists, musicians, directors live and work there.

In his curatorial and artistic activities El Hadji Sy leads an open discussion with the European discourse on the so-called African art and postcolonial history. He often reveals a critical attitude towards ubiquitous power and politics relations - both in the local and global sphere. He is exploring his own, independent forms of expression, based on the contestation of the Eurocentric language of art and on the code worked out together with local communities and informal groups.

El Hadji Sy appeared frequently in the roles of a curator and of an artist, among others, in Whitechapel in London and Konsthall in Malmö (1990 - Seven Stories about Modern Art in Africa), in the Fondation Blachère in Apt (2006), in Goodman Gallery in Johannesburg (1993), at Documenta 11 in Kassel (2002 – as a group HUIT FACETTES founded by El Hadji Sy), many times – in contemporary art galleries in Senegal, Morocco and South Africa.

Recent works and activities of El Hadji Sy were presented at the Biennale in São Paulo (2014) and now (05/03/2015–18/10/2015) – at the El Hadji Sy. Painting. Performance. Politics exhibition in Weltkulturen Museum in Frankfurt am Main. In 2016, the exhibition will be shown in the new version at the National Gallery in Prague (Národní galerie v Praze) and at the Ujazdowski Castle Centre for Contemporary Art in Warsaw.

El Hadji Sy has already been hosted by the Ujazdowski Castle Centre for Contemporary Art in May 2015 with a lecture Explaining the present: between painting, performance art, politics and ethnographic collection.

During the two-month residency, El Hadji Sy is planning to conduct workshops for artists. 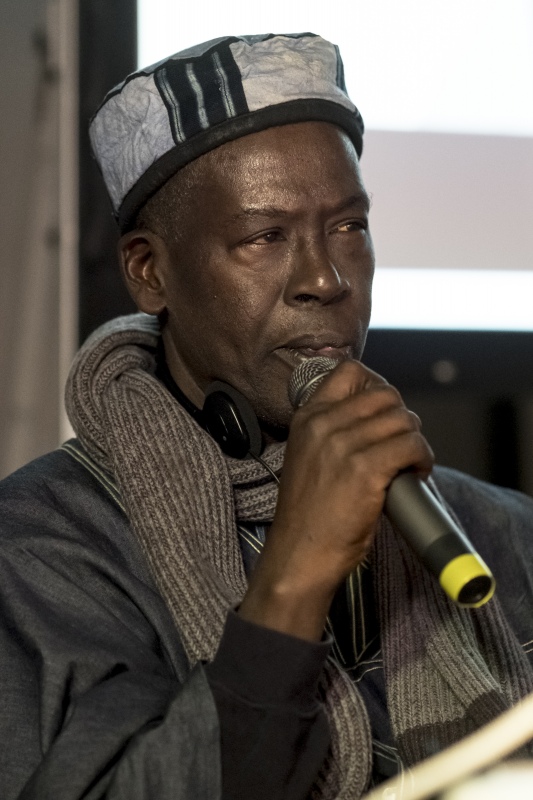