British artist, animation director and academic teacher. In his works he returns to readymade associations and acquisitions of culture deconstructing and recreating available data using film techniques. John Parry came to Poland inspired by a Polish ballot poster from 1989 election (Gary Cooper in High Noon juxtaposed with the red 1989 Solidarność typography). In this project he wants to investigate the juxtaposition of the Polish Poster School with the American Western film genre at their height during the sixties and seventies. He is going to make an animation trailer for the film High Noon using an animated merger of Polish poster design and an American western content.
Visiting Poland is also connected with the transformation of the artist's style. In the trailer Parry will use for the first time his emerging aesthetics, which is a new definition of 'limited' animation. This 'new-limited' style requires - as he explains - that all unnecessary movement is removed and the result is dangerously still for an animation. New limited animation dwells on composition and revels in stillness, inactivity and pauses. In this aesthetics animation resembles a poster. In Warsaw time runs slower, it is not as rapid yet as in the Western metropolises. The artist wants to go back to hand-made drawings he used in his first works. It requires more time but also forces to a personal engagement. The artistic stay of John Parry was crowned with the presentation of his works. 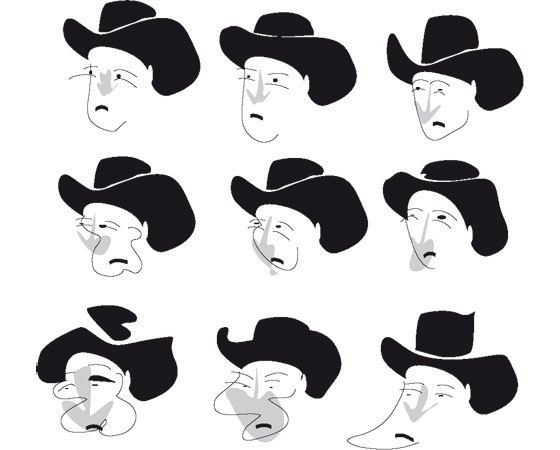