The Wayward Canon was founded by Mark Aerial Waller as a platform for event-based interventions in film and television. This is cinema as a physical space as well as site for historical position and analytical content. The projects are typically durational, and introduce a specific relationship between films and the spaces in which they are presented. There have been three Wayward Canon “micro-salons” organized in the Warsaw clubs.

Simon and the Radioactive Flesh was a collage of Luis Buñuel Simon from the desert (1965) with the works of contemporary artists: Nasan Tur, Sophie Brown & Catherine Evlid, Omer Ali Kazma, Pablo Bronstein, Benjamin Callaway and Mark Leckey. The interruptions continue throughout the film until finally the viewers are spatially interrupted, finding themselves in a parallel to the purgatorial nightclub setting of the film's last dance, Carne Radioactivo (the Radioactive Flesh).

Chroma Key was a screening of the avant-garde new wave disco arias of Klaus Nomi with live performance by London artist Douglas Park. Klaus Nomi was an avant-garde singer and performer who influenced the look of the 1980’s New York club scene as well as films by Tim Burton and Pee Wee Herman. The night brought together the post surrealist poetry of British Artist, Douglas Park with early 1980’s video effects (Cerith Wyn Evans videos) and new wave dance music, dismantling the interface between video, performance and disco.

The final event The Flipside of Darkness presented the film under the same title produced in Warsaw a variation of the ancient Greek drama ‘Orestia’ by Aesculus shot within the interiors of the Palace of Culture and Science in Warsaw. The projection was followed by the live act of the avantgarde electronic polish musician Robert Piotrowicz. 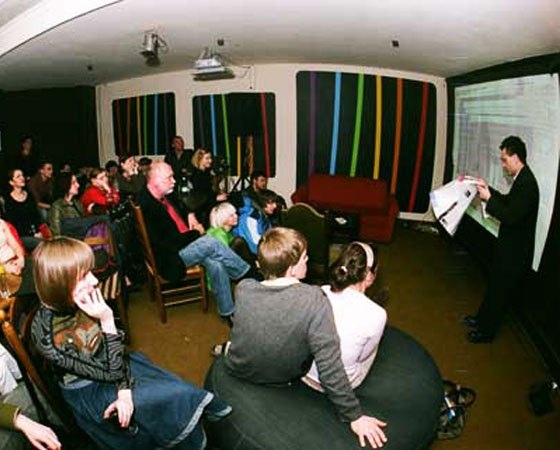 Residents a
Project implemented with support from the Arts Council in London, Lux in London, FACT in Liverpool and British Council in Warsaw.