(born 1992 in Caen, France) lives and works in Geneva. He first developed his artistic practice at the ésam Caen (2010–2015), working with teaching artists and writers like Alice Laguarda and Céline Duval. At the same time, in 2014 he directed the coordination of student festival Court-Circuit. He was also involved in the struggles between local art schools and the French government on a local and national scale. He completed his studies with a second master at the HEAD - Geneva (2015–2017), where he worked closely with Jill Gasparina, Lili Reynaud-Dewar and Laurent Schmid. Still keeping one foot in the fight against the disappearance of French art schools, he worked in a collective to set up two temporary art schools in Avignon and Paris, which gave rise to the research Sur le retour – une recherche critique sur le collectif en école d’art.

After graduating from his studies he joined Action research programme at the Manufacture – Haute école des arts de la scène de Lausanne. At the same time, he joined the programming team of the Geneva art space ÀDUPLEX. He takes part in the new coordination team of BIG - Biennale Interstellaire des espaces d'art de Genève. He also joined the GARAGE – Groupe d’Action pour la Rémunération des Artistes à GEnève. In 2019, as the youngest director programmed for 43rd edition of the festival, was selected by the Bâtie-Festival de Genève with an experimental show D'amour et d'eau fraîche. 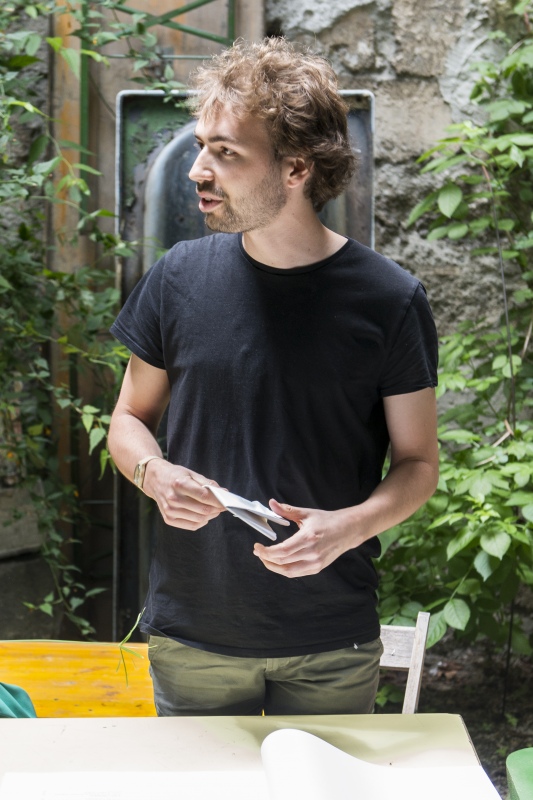