is a curator and program manager at Khoj International Artists’ Association in New Delhi, India, since September 2013.

At Khoj, her responsibilities include conceptualizing, curating and facilitating the various projects of the organization. Major projects that Sitara has been directly involved with at Khoj include Word.Sound.Power (2013-14), exhibition in collaboration with TATE Modern, UK; InContext: Public.Art.Ecology. Food Residency III (2014); Critic-in-Residence for PEERS Young Artist Residency (2014); Of Games II (2014) international Residency program; Nameless Here For Evermore (2015) international exhibition; and The Undivided Mind (2015) international Art & Science Residency program. She has also been actively involved in the fundraising and development activities of the organization, including Artists for Khoj, by Christie’s (2014), a major fundraising event for Khoj.

Sitara’s interests lie in the development of dynamic, self-sustaining and relevant arts centers for participating artists and audiences alike, and the activation of art and culture in the public sphere. Prior to joining Khoj, Sitara has worked as a curatorial intern at the Slought Foundation, Philadelphia and as a History of Art Researcher at Bryn Mawr College, Pennsylvania.

She completed her BA Honors in the History of Art from Bryn Mawr College, Pennsylvania in 2013. 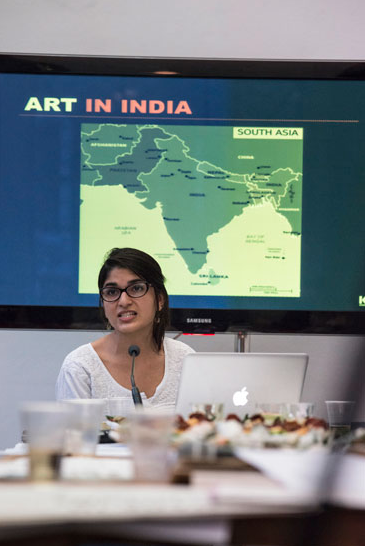 Residents a
The residency has been organized in the framework of the Re-Directing: East project and has been possible thanks to the financial support of the Polish Institute in New Delhi and the City of Warsaw.