The prototype of the City Garden Jazdów is the first fitting of the collectively generated solution regarding the park space in front of the Center of Contemporary Art Zamek Ujazdowski. The simple act of making a path through the very middle of the green wedge between the Castle and the Crossroads café initiates an alternative scenario for experiencing this space. It allows for an exit from the noise zone, which includes a popular asphalt path along the Łazienkowska Thoroughfare and entrance into a different soundscape, provoking a different rhythm of movement and increased sensory sensitivity. The built from wood road in itself is an interesting spatial object, but we are more interested in it as a tool for generating a different perspective of the park with its natural ability. It can be treated as a new backbone, restoring the disturbed balance and compositional order of the area as well as strengthening its social condition. This concept also includes an outdoor cinema, whose infrastructure during the day acts as a nice place to meet and relax.

Amid the opening there was an opportunity to see the latest film from Karolina Breguła, entitled Tower – an opera musical about people who live in a concrete block and are jointly planning to build a tower out of sugar. Permeated with absurdity and unrest, the story of the utopian project refers to the history of post-war residential architecture, analyzes it not from the point of view of its creators and theoreticians of architecture, but from the position of the user, a resident of modernist estates and citizens of the city. Memories of desires, dreams, and faith in a better future are here confronted with the harsh reality and the contradictions inscribed in the plans of the modernists.

The City Garden Jazdów is a project that is long term, interdisciplinary, and oriented towards working with the space surrounding the Ujazdowski Castle. Its aim is primarily to strengthen social responsibility for public spaces. Hence the title, on the one hand pointing to the idea of the garden city of Ebenezer Howard, on the other, referring to gardens created in the city today as places that primarily serve social integration. Thus why, in our work on the project, we decided to open up to different needs and perspectives, including in our creative process specialists from various fields (botanists, sociologists, educators, anthropologists, architects), and above all, visitors of the Centre for Contemporary Art Ujazdowski Castle. We want to explore and develop the castle’s surrounding area in a multi-dimensional way. We are taking into account its natural, architectural, historical, as well as cultural-social qualities, not to mention neighbor relations with the institutions nearby. Our intentions are also to carefully look at the different methods of working with the space of Jazdów. The project aims to, in a subjective way, benefit from natural resources without trying to decorate (colonize) them through art, but also without giving up the human presence in it. The park is being treated as a holistic site-specific venture, framing a very broad picture of it, without forcing to create its only correct vision. Focus on continuous development (from the diversification of views during the preparation process to the testing of prototypes) adds lightness to our actions – an attribute softening the tensions appearing almost always upon carrying out changes in public space. It is of pivotal importance for us that this place be conducive to creativity, to remain open to creative activities, to help strengthen environmental responsibility, and to just be attractive and pleasant.

During the course of meetings (beginning in January 2016) with experts, neighboring institutions (within the frames of meetings with Neighborhood Ujazdów [Sąsiedztwo Ujazdów]), through workshops with young managers of culture (students of the Faculty of Management of Visual Culture of the Academy of Fine Arts in Warsaw), and consultations with Center of Contemporary Art Zamek Ujazdowski employees we analyzed the state of the spatial structure around the CCA. Current ideas for its revival underwent critical assessment, with those most original scoring the highest. The architectural, naturalistic, or sound maps as well as the maps of fun created during last year's Jazdów Archipelago were reformulated in terms of potentials and barriers, trying to transform barriers into challenges. During the project workshop, together with young artists, architects and designers, under the watchful eye of architect Ewa Rudnicka, and later the Georgian artist Gela Patashuri, we were working on possible scenarios for the park and one of these proposals we want to present this summer, inviting everyone to express their opinion on the subject. 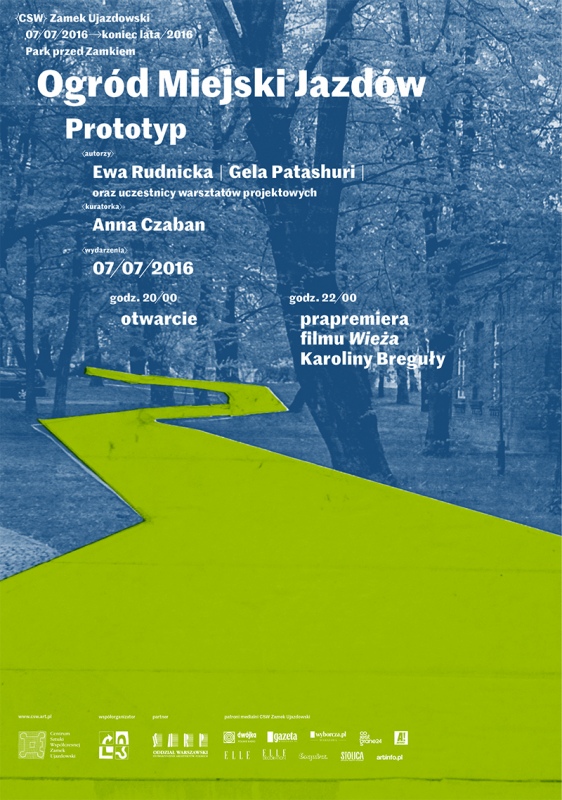 The project is implemented in cooperation