is a choreographer and a performer based in Berlin. He co-founded the Centrum w Ruchu [Centre In Motion] collective. He is a graduate of the Warsaw Ballet Academy and the Performing Arts Research and Training Studios (P.A.R.T.S.) in Belgium. Tymiński focuses on creating motion which explores the structure of the human body. The latter is presented rather as some physical matter and not so much a fully developed individual. It thus becomes a plateau for questioning the established cultural human image. In his brutalist dance Tymiński oscillates between physical labour and ritual, thoroughly penetrating the performer's physicality, and at the same time: reaching his emotional dimension. Tymiński's works have been presented at numerous international stages, such as: American Realness (NYC), Esplenade Theatre (Singapore), Reykjavik Dance Festival, Impuls Tanz (Vienna), La Maison de la culture d’Amiens (France), Sophiensaele (Berlin), and many more.

The Gardener is a perverse allusion to problematic human interventions in broadly defined ecology, a network of relations between physical objects: organic and non-organic elements including animals and humans. The gardener figure is meant to represent a coloniser of the natural habitat, where according to his needs, be it nutritional or aesthetic, he rules over the value of specific beings and their very right to exist: some shall receive protection, some will be annihilated. This kind of anthropocentric model which is one of the major driving forces shaping the global reality, following the rhythm of hedonistic consumption, has become known as "consumer-centric". The division between humans and non-humans has been supplanted by one between the consumers and the consumed where the former, privileged by market mechanisms and considering their scale of consumption a criterion of life quality, keep moving up an ever growing heap of "garbage" they produce. Searching for a promise of a less aggressive human intervention in the very sensitive network of relations between different beings, Tymiński undertakes a study of inter-material eroticism as a potential means of sensitising individuals to inanimate matter and creating an equilibrium of statuses between the human body and its surroundings. In his project, Tymiński becomes both a creator and a guardian of oceanic gardens which are not just an attempt to deconstruct the marine environment, but also his ally in a choreographic act of unity. 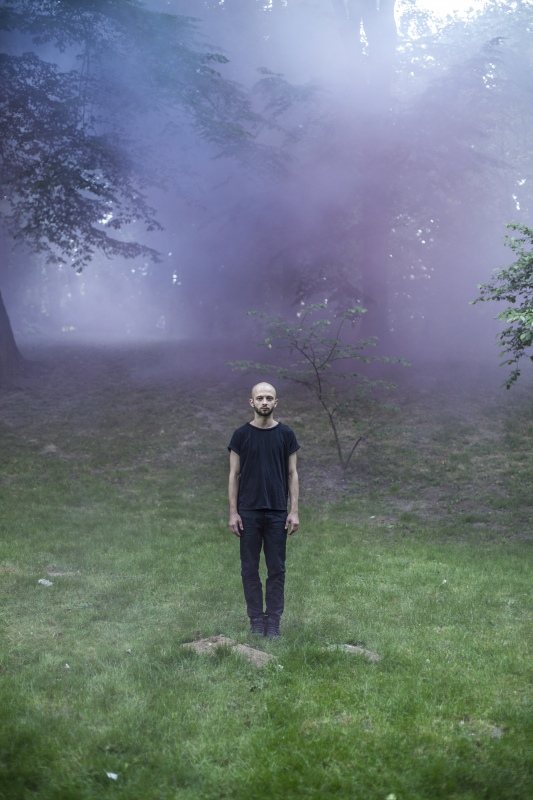 Residents a
Performative residency realised as part of "Feedback: giving and assuming form" project in collaboration with the Institute of Music and Dance and the team of researchers of "Cartographies of Otherness" directed by prof. Magdalena Środa