Lada Nakonechna – author of drawings, public space actions, installations, films and performances. She deals with an analysis of reality using various artistic means and referring to the current political and social problems. While not offering ready hypotheses, she encourages the viewer to personal reflection upon the distribution of means and the domination of the homo economicus model.

During the exhibition entitled "Weekdays" a selection of Lada Nakonechna’s works from 2009-2012 will be presented. "Cards" (2011-2012) is a series of strikingly similar kitschy landscape drawings of sights based on the Internet photos. Each one of them was made during one day while its price was evaluated according to the minimum hourly wage applied in the country where it was created, i.e. in Ukraine, Switzerland or Poland. The comparison of the value of work invested, and thus of the given work of art, looks quite dramatic with reference to the economic zone in which it was drawn.

"Monument for 2" (2011) is a minimalist object resembling two tomb stalls leaning against each other and offering two laconic epitaphs – press articles informing about two suicides committed for economic reasons – in Switzerland during the global crisis and in Ukraine in the transformation period.

Addressed to one viewer at the time, the video installation entitled "Somebody else’s (hi)story" (2009) is a record of a monologue of Nakonechna’s grandmother. Authentic family stories from the woman’s life are in fact combined into one single tale made out of a number of small episodes. The story could go on without an ending. Being used to grandmother’s talking, at some point the family stopped listening to the contents of her stories and started treating the sounds produced by her like regular TV noise present somewhere in the background. The work shows how impossible it is to explain and truly comprehend the reality by the means of TV coverage, in what way we perceive the information presented by the media and how it affects our picture of the world.

"Personal shield" (2011) is an object the archetype of which was noticed by the artist during her stay in Switzerland. It is a small fence erected between buildings in order to separate the access to the space between them. It was turned into a mobile object for personal use, a personal shield, which makes it possible to set borderlines between its user and his or her environment. The work was prepared for the artist’s exhibition in Switzerland, made relatively cheaper in Ukraine and transported by the artists over the Schengen border as hand luggage. At the exhibition in the Centre for Contemporary Art it will be available for viewers to use.

The exhibition was created in the framework of the project TRANSFER: Polish-Ukrainian Exchange 2012 in cooperation with the Pinchuk Art Centre in Kiev. It was curated by Marianna Dobkowska. 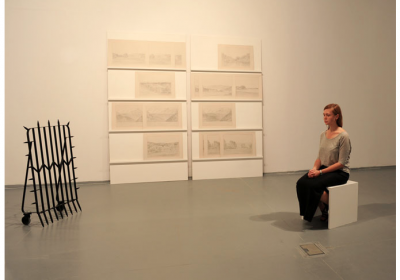 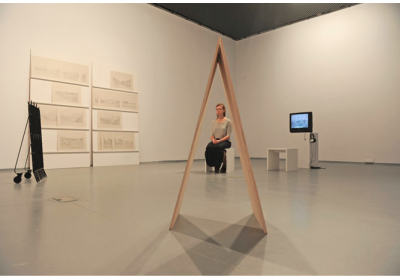 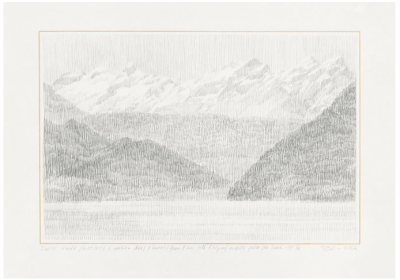 Next presentations in the frame of {Bank Pekao Project Room} – every two weeks on Mondays. Free admission.

The project was implemented with the financial support of the City of Warsaw and Bank Pekao.