In recent years the Project Room has emerged as a showcase for the most promising young Polish artists. Following the success of last year’s edition, which culminated in the award-giving ceremony, the eighth series kicked off in March 2019. As usual, the participants had been selected from over two hundred candidates suggested by twenty three experts – women and men art curators, institution directors, and art-school professors from different cities in Poland.

The programme launched with a project by Marta Krześlak, whose work revolves around dreams, memories, remembered or imaginary landscapes. One such landscape was presented in the Project Room.

The Łódź-based Dom Mody Limanka fashion collective’s practice stretches between fashion and art, and each of their shows is a special event that garners public and media attention. For the Ujazdowski Castle Centre for Contemporary Art the artists made a film.

An artist interested in film, sculpture, and sound, Jan Moszumański-Kotwica showed a new work. Many of his projects deal with contemporary ideologies, their emotional and aesthetic dimensions.

In the autumn, the Project Room housed an exhibition by Wiktoria Walendzik, student of the Szczecin Academy of Art, who mainly does drawings and objects. This was her first solo show.

Horacy Muszyński works at the interface of film and performance art, experimenting with various pop-cultural figures and motifs. His exhibition at the Project Room built up on his interest in the film medium.

The year’s final project was a new production by the duo Róża Duda and Michał Soja. The artists have their background in multimedia: animation, experimental film, and installation, and the main theme of their works is contemporary human subjectivity and its underlying conflict: dreams of agency versus entanglement in exploitation relationships.

As in previous years, the artists were working together with young curators: Marcin Polak, Szymon Żydek, Arkadiusz Półtorak, Kuba Borkowicz, Aurelia Nowak, and Marta Lisok. An international jury will select two exhibitions for the First Prize worth 20,000 zlotys and the Second Prize of 10,000 zlotys. The decision will be announced in January 2020. 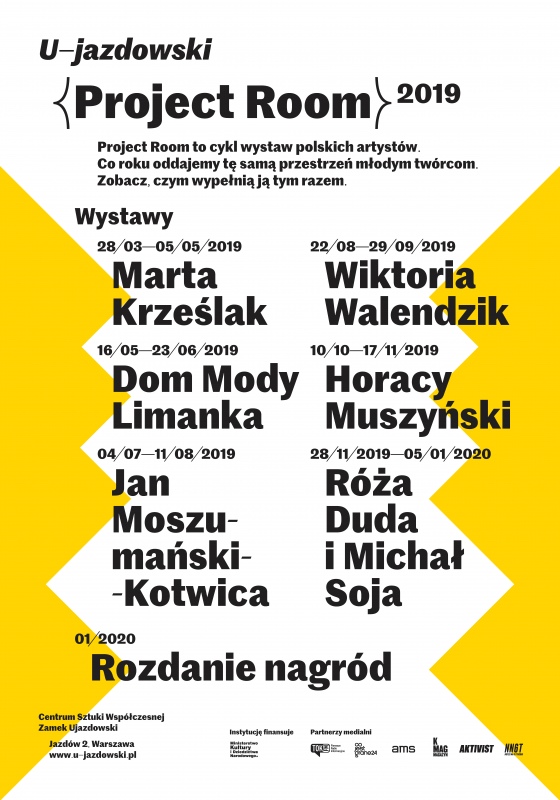