(b. 1979) One of the most prominent Polish virtuoso flutists, specializing in contemporary music. Her artistic activity is primarily performed within the framework of the Flute'o'clock duet. Liebchen has been collaborating with young Polish composers – Dariusz Przybylski, Wojciech Ziemowit Zych, Tomasz Prasqual, Sławomir Kupczak, Dominik Karski – for many years, widening the flute repertoire created specially for her. She pays particular attention to the work of the last of the composers, whose monograph – Glimmer – was recorded by the duet Flute'o'clock in 2016 under Bôtl Records. Two years earlier, the group took part in the recording of Sławomir Kupczak's monographic album, Res Facta. Ewa Liebchen is currently working on another album devoted to the trance aspects of the flute. Next to the works of such classics as Philip Glass and Bernhard Lang, special compositions by Sławomir Kupczak and Artur Zagajewski will be featured on it.

(b. 1980) After studying percussion at the Fryderyk Chopin Music Academy in Warsaw, he acquired experience on many levels: from music in the genres of classical, jazz, entertainment, and ethnic music, to experiments on the borderland of electronic and avant-garde. He has recorded dozens of albums and played at concerts across Europe, the Middle East, Korea, Japan, USA, and Brazil. He has collaborated with, amongst others, Helmut Lachenmann, John Tilbury, Evan Ziporyn, Gyan Riley, and the Kwadrofonik group. Zemler also performs as a soloist, presenting his compositions and improvisations. The artist's achievements include three solo albums: Moped (2011), Gostak & Doshes (2014), and Pupation of Dissonance (2016); the last two were released by Bölt Records. Currently, he is working on an album of improvisations as a duo with the legendary Hungarian-Polish pianist Szábolcs Esztényi.

(b. 1939) Composer, pianist, improviser, and pedagogue of Hungarian origin. He has been living in Poland since 1969. He has performed many première works of Polish composers (including Pianophonie by Kazimierz Serocki, Variations on a theme from Paganini by Rafał Augustyn, and Paweł Szymański's Etudes). He was one of the first performers to present works by John Cage and American minimalists. Esztényi also collaborated with the Experimental Studio of the Polish Radio. He pays special attention to the study of improvisation in his pedagogical work. Bôłt Records released recordings of his original compositions, as well as of Kazimierz Serocki, Tomasz Sikorski, Katarzyna Głowicka, and Sławomir Kupczak.

(b. 1981) Vibraphonist, drummer, improviser, composer, and performer. Lecturer at the Fryderyk Chopin University of Music in Warsaw. Co-founder of the quartet Kwadrofonik, collaborating with, amongst others, Mitch&Mitch, Shy Albatross, with soloists – Natalia Przybysz, Felix Kubin, Andrzej Smolik, also as a session musician. Pękala is the founder of the percussion duo Hob-beats (now Pękala/Kordylasińska/Pękala), specializing in performing the latest music. Enthusiast of musical minimalism. In 2015, he established and since has been organizing the Warsaw festival Chrobot, with roots in noise and electronic music. He is a laureate of the Polityka Passport (2015) and has won numerous phonographic awards (including the Folk Record of the Year). His solo debut album, MONOPERCUSSION, was released by Bôłt Records. 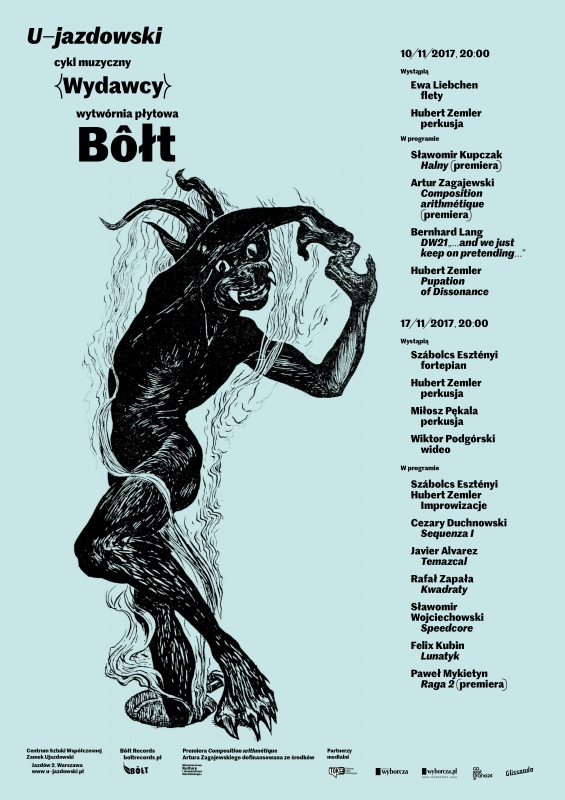 More a
exhibition
Kornelia Dzikowska
Power Play
Udostępnij
We use cookies to ensure that we give you the best experience. Learn more about our privacy policy Accept