November 2015. Oxford Dictionaries, for the first time in the history of the “Word” of the Year, nominates no word, but a pictograph. An emoji, which is commonly known as “Face with Tears of Joy,” according to the deciding team, best reflects the ethos and mood of the time. There is quite a bit of truth in this – soon enough, the face with its unsettling expression gained an even more demonic aspect, as it is being used massively to express Schadenfreude. The evolution of its meaning resembles the sad fate of Pepe’s frog, which became the emblem of the alt-right movement.

Composed of images, time-lapse photography, digital prints, and the sound installation prepared for {Bank Pekao Project Room}, the exhibition by Kamil Kukla presents the artist’s latest works, in which an accumulation of organic-digital motifs complement each other and create post-human hybrids. The title refers to the ambiguity and condensation of motifs visible in the work of Kukla. Glittering, oval shapes, meticulously chiseled, are adorned here with nervous, impasto brushstrokes. Bodies that have been fragmented and reduced to sexual organs are both enticing, but also swollen, reddened, bruised, decaying, and sick.

Although Kukla’s painting stems formally from the surrealist tradition, his dense, fragmentary images are in fact a faithful reflection of our reality, its synthesis torn from the superficial anecdote. They are depicting the world of manga for teenagers, in which everyday life is mixed with the supernatural, sweetness with violence, and prudery with exaggerated sexuality. A world that has imperceptibly become our own. 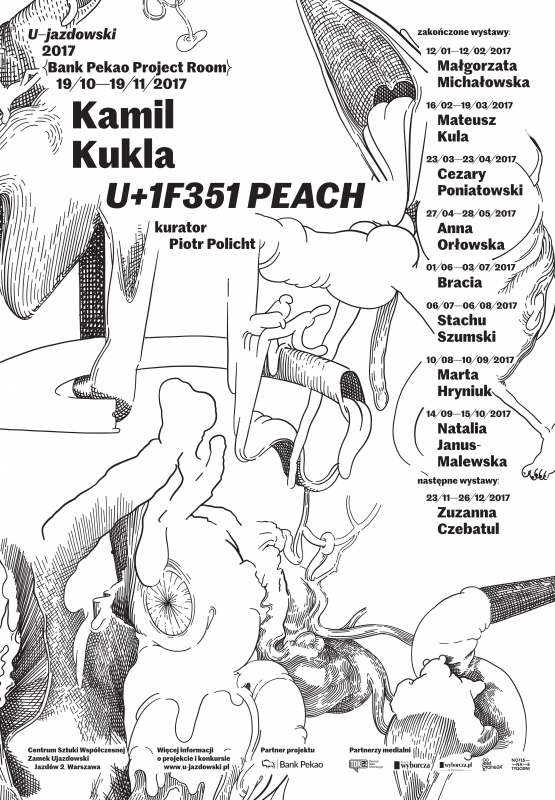